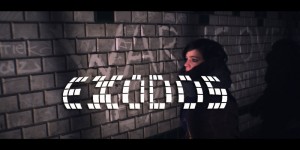 “EXODOS
In February this year, the Danish band Efterklang became one of the revolutionists of the contemporary concept creative-common-licensing. The publishing of their movie “An Island” directed by Vincent Moon, was based on the idea of sharing rather than owning. This viral aspect has established itself in terms of music (Spotify etc.), but might now be taking over cinemas, too. Literally everybody can acquire a creative-common-license to organize a non-commercial screening at home, outdoor or wherever. All you need is a group of at least five people, proof of your screening and an optional donation after that. One interesting new film, also engaging in this system, is the Berlin-based project “Exodos”. Interesting it is not only because of “international broken English” language improvised by German actors and actresses, but also because it may be presented as a fairy tale-, road-, action-, porn- or agitation-movie free to your liking. Overall, it tells “A story of phat crises and of at least 7 guys and girls reacting to these global ecologic, economic and of course to miscellaneous private dilemmas”. Get your cc-license now to screen and watch it with your family and friends. We are curious how this alternative and very contemporary system will support unknown artists, work out financially and whether it will establish itself in the industry… We are hosting a screening in London. Date and Location tba!”
der ganze Beitrag hier